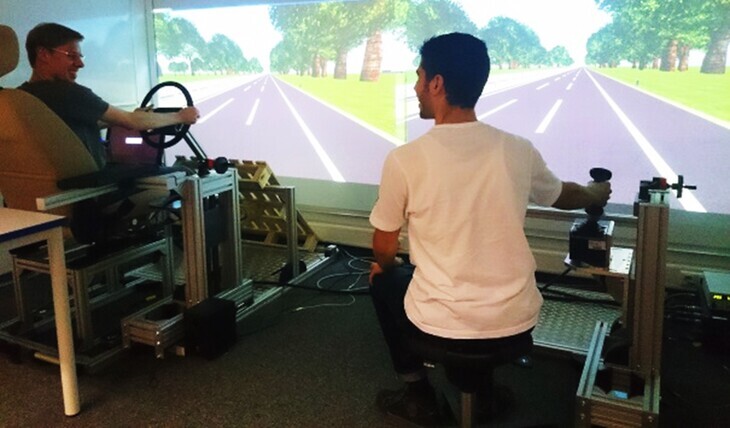 System Ergonomics for Cooperatively Interacting Automobiles: Comprehensibility of Automation Behavior and Human Intervention Options in Normal Operation, at System Limits, and in the Event of System Failure.

The steadily increasing availability of automated driving functions, which have now also found their way into small cars, will permanently change the mobility of our society. 85 percent of the drivers surveyed said they were already open to autonomous driving functions and hoped that this would increase road safety. Currently, far more realistic than autonomous vehicles, however, are partially and highly automated vehicles that cooperate with drivers and other vehicles and still require human intervention for driving.

In order to further advance the research and development of such vehicles, a consortium of leading research institutes together with the Department of Systemergonomie at IAW – Institut für Arbeitswissenschaft (Institute of Industrial Engineering an Ergonomics) – has initiated a priority program at the DFG – Deutsche Forschungsgemeinschaft (German Research Foundation), which has been approved under the title "SPP 1835 – Kooperativ interagierende Fahrzeuge” (SPP 1835 – Cooperatively Interacting Vehicles).

A central challenge in (partially) automated vehicles is that control over vehicle driving sometimes lies with the driver and sometimes with cooperative automation. In particular, the changes between different degrees of automation (transitions), which are also accompanied by a change in responsibility, are further investigated in the project. In the process, transitions during normal operation as well as more critical changes (in terms of time) at system limits or in the event of system failures are investigated more closely.

In this program, an interdisciplinary team of researchers at several German universities is conducting holistic research into the cooperation of automated vehicles with other vehicles and humans. In the second phase of the project, which has already started, the IAW is investigating the comprehensibility of the behavior of the automation and the possibilities for human intervention in normal operation, but also in particular in the event of a system reaching its limits or system failures. The aim of the proposed project is to conduct scientifically based investigations in order to find out which measures are useful for the comprehensibility of the automation behavior of cooperatively interacting vehicles and for human intervention options that ultimately lead to an efficient, safe, usable and accepted system.

In order to be able to assess the driver's possibilities to intervene in the driving situation, we need a deeper understanding of the driver, their attention, their current actions and their interaction with the automation. The objective is therefore to first understand possible exchanges between the automation and the driver, to represent these as models and, based on this, to support them as safely as possible. The driving simulator will be used to investigate in detail how transfers take place and how to design the best possible support for the driver. In the Exploroscope, we use a participatory approach to developing and implementing new interaction concepts. A central idea for the support of handovers is so-called Confidence Horizons, which continuously compare the driver's ability to take over with the driving abilities of the automated system. The aim is to identify possible gaps early on and close them, e.g., by means of warnings and/or emergency maneuvers, before accidents can occur.

Copyright: © Frank Flemisch Distribution of control between human and automation (left) as well as the user's confidence horizon derived from this as system boundary

The first steps in this direction were already taken in the first funding phase in cooperation with the ika – Institut für Kraftfahrzeuge (Institute for Automotive Engineering). Within the framework of driving simulator studies, the behavior of drivers during an automated journey was observed and analyzed. Gaze movements were also recorded and subsequently examined to determine whether the gaze sequences of drivers who safely took over the driving task differed from gaze sequences in the run-up to unsafe takeovers. The results showed that unsafe takeovers can indeed be detected in advance by the gaze sequences of the drivers, which enables early interventions, e.g. by emergency brake assistants, in order to ensure the protection of the passengers.